So like three weeks ago now I set up this blog and I still haven’t done a durned thing with it. IN FACT it’s almost as if I’d been eaten by lions. or something…

actually, it was much worse: i was eaten by my family for a few weeks.

First off I was in Seattle. My brother got married. The wedding was lovely and went without a hitch. Now Dima is my sister in law. It’s strange, like it’s just something by a different name, totally normal. It’s almost like it’s something that’s always been. 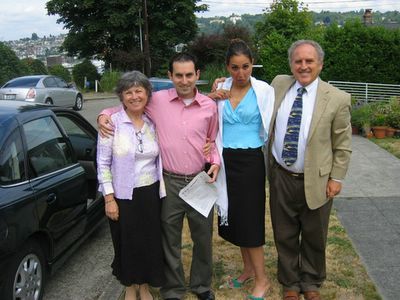 Mapping it out roughly like, the first week or so in South Africa was mostly a waiting game. a cold waiting game. it’s winter here! and my aunt and uncle are having their house remodeled so walls and floors are missing. this is obviously a perfect time for someone to rob them. which they did. my cousin and i returned home at 1am to find the alarm going off and the house completely robbed. my aunt and uncle had slept through it all in their bedrooms. we woke them up and called the security people. here you call the armed response team before the police. it’s crazy because in the states we consider an electric fence a pretty secure bet. when i came 10 years ago all the houses were surrounded by razor wire and had attack dogs. now those are considered easy to get past (put a tarp over the razor wire and feed the dogs poisened meat). now everyone has electric fences which apparently don’t work. here is the house opposite my uncles. they have a nice touch with the electric fence concept. 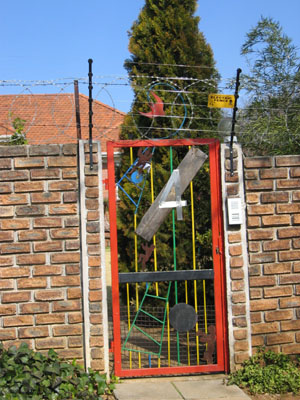 THE HOUSE OPPOSITE MY UNCLE : note the playful razorwire/electric fence combo

In general the week franticly led up to my grandfather’s hundredth birthday party, which went spectacularly. I got to hang out with about 40 of my relatives. Imagine me to the fortieth power. It was extreme, reaching high and pulling it off. A sociologist would have had a field day. 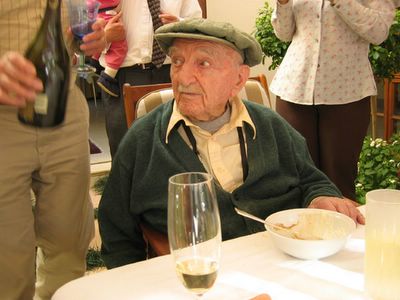 It was awesome to hang out with the cousins. I’ve never hung out with young kids before but I discovered that I love them. Or maybe I just love other people’s kids (less work). Either way, they’re lovely. Cindy tells me I should be a nanny. Maybe… I think I could be a nanny abroad, teaching young kids English. I think I’ve overcome my opposition to teaching English. Before it seemed like signing up to be a tool for globalism but I guess if people are actively hiring you then it’s like they really want to learn… and as long as my country is on top, why not take advantage of everyone wanting to learn the language? whatever way I justify it, it makes economic sense. 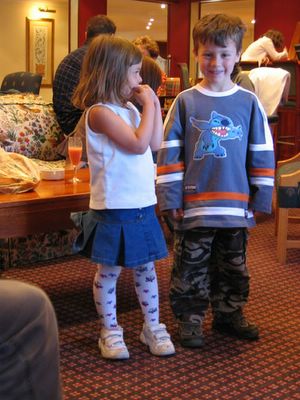 Then came level II of the Livni Family Experiment: the Livnis Meet Wild Animals. We (only 25 of us) spent a week at Mabula Private Game Reserve. It’s a five star resert where we spread out and enjoyed the wildlife and the highveldt environment. I went on a few walks by myself and with family but mostly saw animals on jeep and horse rides. 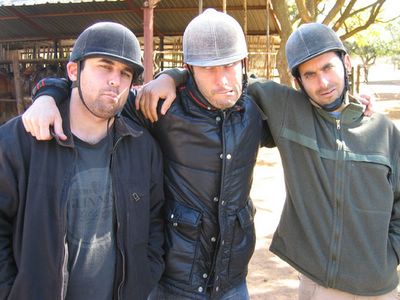 THE LIVNI BOYS GO FOR A RIDE

I saw tons of outrageous animals: lions, giraffe, rhinos, tons of buck, different kinds of monkeys, and a ton of others I’m forgetting right now. It was cool cause it wasn’t at all like a zoo. We really got to see the animals up close in a pretty natural state. Lions are just amazing. I think I had this fantasy that you’d be walking along and see a lion and then run. Actually, you’d never see the lion and it’d be unlikely that you got to run more than a couple feet. Those guys charge you at 60kph. We were 20 meters from one and we would never have known. Nutty. Scary. Here is a picture rhinos about 10 feet from the jeep: 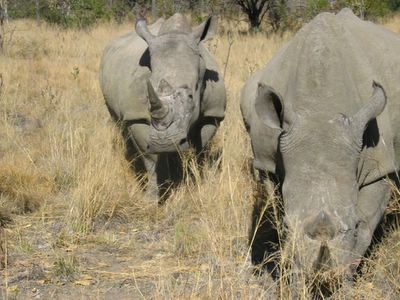 Anyways, now that I’m cut loose from all that I should be able to update all y’all more often. I’ve been using my digital camera a ton and now I have a massive amount of photos. Far more pictures than sound. That could mostly be because I’ve been around family and don’t feel good talking to a tape recorder in front of family. 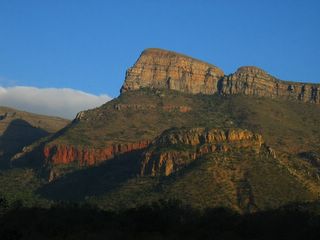 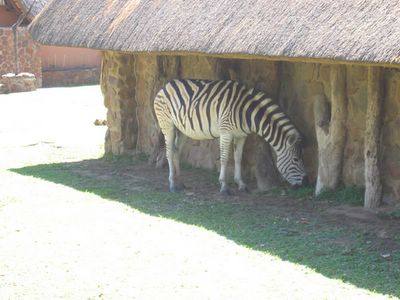 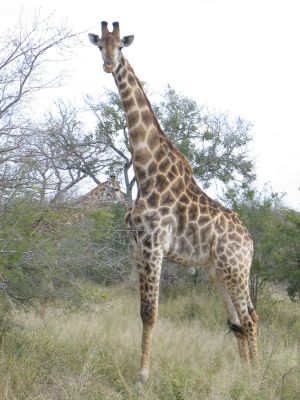 The basic plan is to travel on a tourist bus (BASBUS) that goes around the country. You can hop on and off at various tourist destinations. South Africa is more expensive than I’d like: about $10 (R60) gets you a bed at a hostel. You can eat pretty well for another $7 and then there’s activities and transport. That’s OK but not spectacularly cheap. It all comes from not being able to cook your own food and sleep outside (this country is big on camping). So I’ll do the hostel thing for a few (4?) weeks and then it’s back to Jo’burg to help type up gramps’ autobiography. I will try to communicate when I can but while it’s cheap to call South Africa from the states, to call the states from here it costs about 34 cents a minute. No kidding! On the other hand I don’t have a phone so it’s not like you could call me anyways. So then there’s email. I haven’t been able to update this blog, read email, or anything else connectedish for two weeks or so. 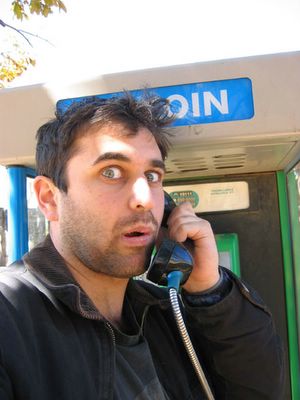 THIS CALL IS COSTING HOW MUCH?

And as the sun sets on the African horizon, I bid you all adieu till next entry. Here I am living high on the hog and, some homesickness aside, soon will be living the carefree life of a tourist.

RSA apartheided out and car me later
Scroll to top