Today I went to the MuseuMAfricA. It’s a kitschy place that every so
often it takes you by surprise. It has the usual native artifacts, San
Bushman rock paintings, and an exhibit on the history of the photograph
but then it has a quality that can only be South African. By this I
mean the exhibit on South African history as told by the victors. The
best exhibit in this vein is “On Trial for Treason” which is a
documentation of the historic Treason Trials of the 1960s where, among
many others, Mandela was tried and sentenced to life in prison (until
his release in the late 80’s).

Among documenting various police faux pas, such as erecting a giant
cage in the middle of the courtroom in which to house the prisoners)
they tried to document the history of each defendant a way that I’ve
only seen in South Africa. They had a photos of the defendants (there
were about a hundred or so) all over the room and under each one they
had a book on which you could write everything YOU knew about what
happened to them. It’s an astonishing idea: people who witnessed events
would make the actual history of the place and that the books were
mostly blank made the exhibit even more powerful. Mostly relatives paid
their respects to those killed by the government or gave places where
more information could be found. But I’ve never seen this idea of
participating in museum exhibits with your comments in use anywhere but
South Africa where it seems to be ubiquitous.

The other part of the exhibit which grabbed me was the display on how
the different newspapers covered the event. They had the various front
pages of every major periodical at the time lined up next to each other
and it was simple to tell the biases in each. Had they stopped there it
would have been interesting but they went further and did something
brilliant. The museum had obtained the actual negatives of the photos
for the Rand Daily Mail that week. They then showed the actual picture
taken by the negatives and alongside the way it was edited and cropped
in the final paper. The museum placards explain it this way:

All of us know how people can choose words to make a special point. It
is also possible to choose and edit photographs to put forward a
particular point of view.

Editing a picture of the placard-holding crowds changed its meaning a bit.

What a photograph means, and what people will think when they look at
it, also depends on the caption that goes with it.

The caption is very important. It explains where, when and why the
picture was taken. At the time of the Treason Trial the caption did not
include the photographer’s name.

The editor may wish to cut out or “crop” parts of a photograph that have
nothing to do with the story or that spoil the design or beauty of the
picture.

These two prints are from negative numbers 6 and 7 from the contact sheet.

The top picture shows a white child in amongst the demonstrators.

So he changed his point of view a little bit and took the bottom picture
where the boy is at the left edge of the picture.

In the final newspaper version, the editor cut the boy right out of the
picture. He did this to make the photograph stronger, both in the story
it tells, and in its design. You can just see the boy’s hand at the
edge of the picture. 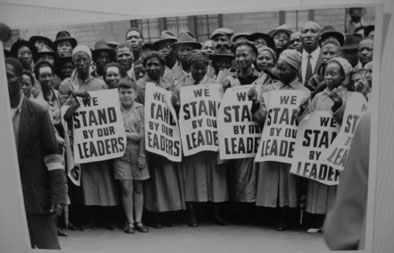 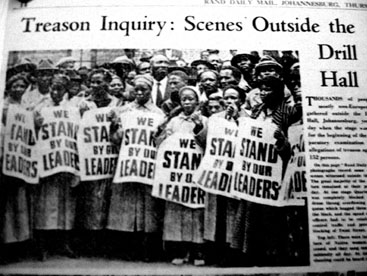 PICTURE AS SHOWN ON FRONT PAGE OF THE NEWSPAPER

Here is the original photograph of a picture that appeared in the Rand
Daily Mail with parts of it cropped or cut out.

Note how important the caption in the newspaper is to explain what is
happening in the picture.

Can you see the 4 photographers in the picture?

Would you have edited this photograph in the same way?

NOW IT’S YOUR TURN
Use the two L-shaped pieces of card to blot out different parts of the
picture.

Notice how the story and the design of the picture change as you more
the cards around? 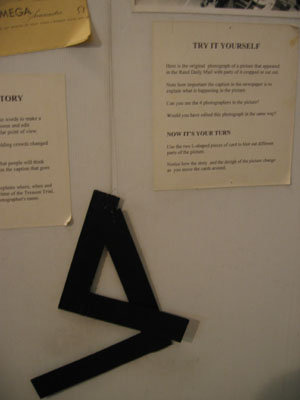 Thirdly there was a scene of a black maid and a white guy watching the
treason trial on TV. On each of them there was a placard which said
“What’s she thinking?” and “What’s he thinking?” 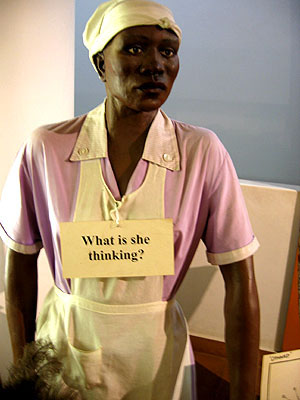 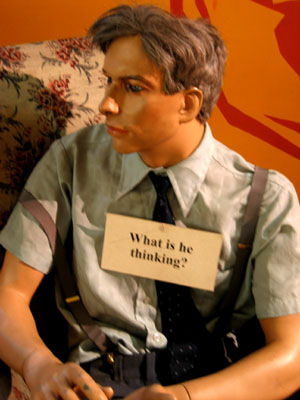 Then later tonight I went to see the Imelda Marcos movie, “Imelda”. It
dragged a little but was mostly an interview with Imelda who appeared
completely self deluded when juxtaposed against the actual events of the
day. I thought the movie was most interesting in answering the “What
the hell was that ruthless dictator thinking?” or “How can they possibly
justify those those atrocities?” types of questions. For example,
Imelda feels that Filipinos felt better because they saw her looking
good. They identified with her so in making herself richer she was
making them feel richer as well and when she looked good, her people
looked good. To this effect she would build opera houses so the
Filipino people could have a world standard to aspire to. Of course
only a very small elite ever went to these huge buildings which cost a
small fortune but this did not deter her from building more art
galleries, more dance halls and extravagant clothes. While the audience
chuckled darkly at her twisted logic Imelda might have more of a point
than we want to give her credit for. After all: she lived it and she
knows what kept her in power. More than anything it reminded me of the
Allure of the Mean Friend episode of This American Life
(http://www.thislife.org). Sometimes it’s hard to fathom why people
support those who are cruel to them. Imelda was able to tap into
something very complex, very core to people. What it was it’s hard to
say but after all the terrible things she did to her country, after
being removed by a popular uprising, she returned 10 years later with a
huge amount of popular support and currently both her son and daughter
are in public office.