yesterday i headed to the apartheid museum which turned out not the be
the apartheid museum at all but rather “the fort”. my experience there
was cut short midway as i apparently did the entire tour backwards,
meaning only at the end did i get to the place that you’re expected to
pay at. it was like walking into sutters fort through the back door.
what got me caught was that i didn’t know that you’re not allowed to go
through independantly. after 5 minutes of explaining to guard that i
was supposed to have paid but didn’t and him trying to understand why i
was there (“are you working with construction?” he would ask me) i was
sent meekly to the front desk, paid, and then waited for the tour to
come round to the parts i wanted to see. not being able to go through
without a guide struck me as odd as did the prohibition on photography.
you could not take any pictures at all. no explanations. there were
also no photos for sale at the gift shop, which stuck to generic things,
nothing about the fort itself: flags, maps, animal guide books, mugs
with animals, flags, or both on them.

the fort was one of the ruthless jails where people were sent off and
not expected to be heard from again. you walk through and are shown the
treatment of prisoners and what they ate and how “blacks” were treated
worse than “coloreds” who were treated worse than “whites”. there were
not just political prisoners but also minor criminals there. mandela was
held there a few times during the 60s. terrible terrible stuff went on.
it is now the site of the constitutional court, which is a really cool
concept. the court was created in a very interesting way, almost
seeming informal. it reminded me a little of the seattle library in
this way. the foyer was made to symbolize a tree. aparently african
tribes traditionally held their courts under trees to symbolize the
openness of the system. also, in the inner chambers of the court, there
is a streak of a one way mirror behind the members of the court through
which one can see the sidewalk and all the people going about their
business. this after thinking how nice it was, i immediately thought
about assasinations, which didn’t seem to occur to the builders, such is
the goodwill of the country.

one of the really interesting things about this museum/monument/site was
that they really seemed to want to know what you thought of it. it was
really really important to them to have feedback, as if the dialogue
MUST go on. i was honestly shocked that, after my tour guide offered to
reshow me the places i’d wandered along alone, we got to the last room
and she wanted or even expected me to write down my thoughts and
emotions in the same book as the survivors of the camp. it’s odd how
you can do that in a monument that’s only a couple years old. it was
also interesting because, since you only go around in groups, what
comments you choose to write on the piece of paper are there for all to
look at immediately (it’s not like a drop box). however, i assume at
the end of the day the comments are collected and placed somewhere else
because there were only one or two there. despite this inability to
appeal to anyone but members in your group, who for me would probably be
my harshest critics, there was a single note on the outside courtyard
where prisoners were stripped and had to do a humiliating dance ending
with showing their anuses to the guards. the theme for the bulletin
board was “do you think people today have *too much *freedom? are there
some important issues that this display leaves out?” the note read:
“yes. discuss the important reasons we need the death penalty today.”

so today i went to the real apartheid museum . really interesting, a
little like yad vashem but more of a focus on empowerment though it
definately laid the groundwork for an argument legitimizing the current
government. what was most interesting were the cartoons critical of the
TRC (truth and reconciliation commission). anyways, was very well
thought out use of space. i wanted to buy the desmond tutu doll but it
was $50 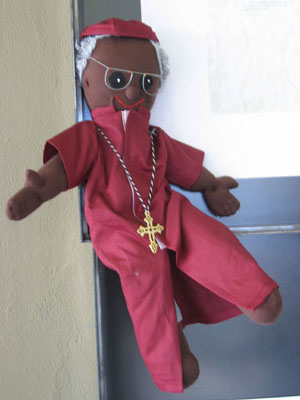 DOLL OF THE ARCHBISHOP DESMOND TUTU

CAR ME LATER
more of a highlight in my day is getting in an accident. an insane taxi
pulled out in front of me and i just caught the front corner with mine.
in the US it’d have been his fault for being in the road and cutting
me off but that doesn’t really make sense here. point being there’s now
some paint damage on my cousin’s car, which is sad. i guess he doesn’t
need to worry about it (he’s living in london anyways) but still…
sucks. i hate breaking things. specially expensive things. this one’s
worth about 2000 dollars. it was an interesting cultural experience.
the guy who i hit cared mostly about missing business and being late and
not getting enough people in his taxi. i gave him 170 rand ($25 bucks)
and he headed off quite happily with a front light missing. i think it
may have been his fault but still, i think he needed the money more than
i did and i think you’re supposed to react more quickly here. let’s
just say this wasn’t the first time his car got hit. 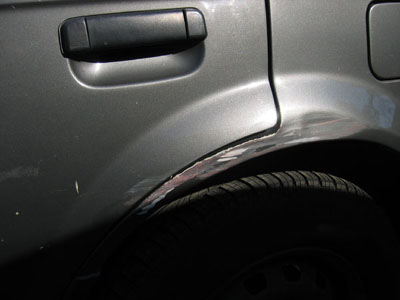 SCRAPE ON MY COUSIN’S CAR