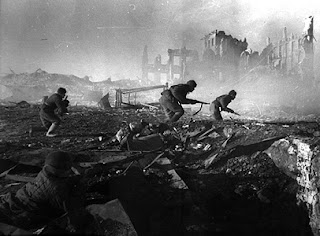 World War II was the most destructive war in the world’s history up to this point. Tens of millions of lives were lost, millions of acres of land were destroyed, billions of dollars spent, homes and government offices were obliterated, and lives were shattered. At the end of the war, the Allied forces stood victorious, but nearly every nation lay in rubble.

World War I was “the war to end all wars.” Check out how we hedge our bets now! I mean “up to this point.” One would hope that we’d never have a war like that again but what we teach our students is that everything is possible.